My colleagues and I have recently been working on a large project to revamp a core process for the company. In that work, I am reminded of how critical stakeholder analysis is to the success of any change initiative. It is so important to think broadly and thoroughly identify all the functions and people who will be impacted by the proposed change – so you are not caught off guard when an overlooked stakeholder torpedoes the project with a question about how they’re supposed to complete their work now that xy&z has changed. (We witnessed that in a separate project a few months ago and lost time doubling back to retrofit a solution and incorporate the forgotten interdependency.)

As I mentioned in a LinkedIn post (https://www.linkedin.com/pulse/change-management-its-more-than-just-having-coffee-greg-matsunami?trk=prof-post), you’ll want to consider both primary stakeholders (those employees who will be asked to do something new) and secondary stakeholders (those whose jobs are not directly impacted but who need to know about the change because their work is downstream and they may receive inputs from upstream partners in a different format or cadence). After collecting that information, it’s helpful to map your stakeholders in a grid such as the one below so you can see how they cluster. Focus on the people that are most highly impacted and have the highest degree of influence. (Change agent strategies overlap significantly with this analysis so it makes sense to integrate your strategies for more comprehensive planning.) Create your stakeholder engagement and communication plans with these people top of mind.

As you can see from the circle, I recommend working relatively deep into the organization, reaching out to medium level influencers in the most highly impacted segments of the business. That’s because you want to make sure you have sufficient support where it matters most. Depending on who these players are, you may be able to elevate their influence within their departments by giving them an official role in the initiative (e.g., appointing them as a change agent) or providing leadership development training to them.

Another way to slice and dice your stakeholder group is to place them on a similar grid (same y axis) but this time map them against their willingness and ability to adopt change earlier versus later – what I’ll broadly call agility. 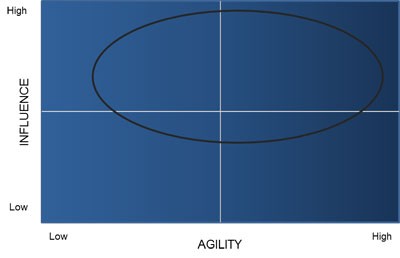 In this analysis, I recommend focusing intensively on the most influential people in the organization (irrespective of title or position) and make sure they’re on the journey with you.  The more agile of those people (i.e., those least resistant to change) can be very effective allies/change agents as you plan for and implement your change initiative.   In this work, it’s also important to understand why certain people are more open to change than others.  If they’re later adopters merely because they have a high need for information before they get on board (i.e., are less conceptual or can take less “on faith”), then find ways to feed them what they need to gain their support.  If, on the other hand, they’re perpetually stuck for whatever reason, it probably makes sense to focus your work where it will matter most.  Always ask “is the juice worth the squeeze?”  You’ll see that the circle I’ve drawn above doesn’t include the least agile of the influencers, for that reason.  That said, remember that you’ve identified these people as influential… so even if they’re not a key component of your change agent strategy, you still need to monitor their impact on the team so they don’t interfere with the organization’s progress.

A Trifecta for Effective Change Management
Measuring the Success of Your Change Efforts
Powered by EasyBlog for Joomla!