Change Agents: Engaging the Organization from Top to Bottom 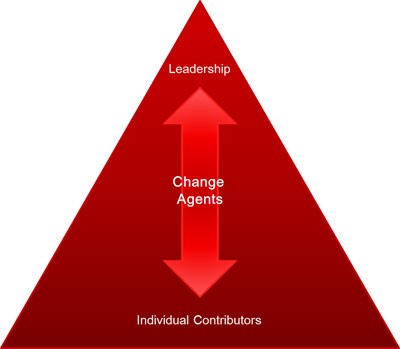 “Ask the right people… my manager doesn’t know what I do.”

That was probably the most important response we got from a baseline survey we fielded soon after I started in the change management role in my former company. While I had planned to initiate a change agent strategy to support the implementation of our initiatives (as most change management theories recommend), I had targeted influential “middle managers” as the primary lever to facilitate change in the organization.

Because of this insight, we set up a two-tier change agent network – one composed of individual contributors who could advise on the tactical details of their day-to-day activities and working relationships and another group of managers and directors to help shepherd change more broadly through their departments and functions. Engaging the base at multiple points in the organization has proven to be an effective strategy.

Another approach we took to increase the effectiveness of our change agent networks was to look more comprehensively at the role they could play to support our initiatives. Much of the change management literature I’d read focused on how change agents could be of service to the project. It was all about pushing information out – arming people with tools to help their colleagues understand and adopt whatever new processes or systems changes were coming their way.

The question that kept coming for me was “what’s in it for them?” We were going to ask our change agents for a significant amount of time (even though we worked hard to keep it to a minimum), so we needed to give them something back. It became clear that that something was influence on the project and how it rolled out.
So instead of merely providing our change agents with tools and information to assist in the one-way flow of communication out into the organization, we defined four roles for our change agents to play:

Listener. We asked them to be the eyes and ears of the project among their working teams and to relay questions and concerns back to our sponsor and project team.

Advisor. We also asked them to participate in working sessions to help refine a proposed process change and/or approach to training, thus ensuring that the solution and training would make sense to the people we were asking to adopt the change.

Communicator. Consistent with the more traditional role of change agent, we asked them to be a spokesperson for the proposed change – to provide updates in their regular team meetings and to answer any questions that might come up. Having been involved in the workshops mentioned above, they felt more comfortable playing this role with their colleagues.

Leader. As an organizational development strategy, we planned to use these change agent roles as a way to develop leaders in the company. By asking individual contributors and some more junior managers to step into the role of presenting new ideas and advocating for new behaviors, we gave them an opportunity to develop influencing skills and raised their visibility among our leadership team.

By taking a two-way approach to communication and our change agent roles, our project work and change management strategies were more robust, facilitating the transition from awareness to understanding to adoption. to ownership.

The Importance of Sponsorship in Change Management
The Value of Repetition
Powered by EasyBlog for Joomla!