Now that I’ve left lululemon, it’s interesting for me to notice what wisdom has followed me into this next adventure.  Here are some lessons that have stuck with me and are particularly germane to change management:

1.  People only complain because they care.

Think about it. It’s true.  If you were apathetic or ambivalent about an outcome, would you bother to express dissatisfaction about a current situation or the impact a new set of behavioral expectations was likely to have on you?

So as managers of people in your organization, be grateful for that.  Harness your team’s passion (even if expressed as grumbling) and involve them as critical stakeholders in whatever change you’re trying to bring about.

2.  People continue to complain because they aren’t feeling heard.

One of my favorite stories comes from my time at Levi Strauss, not lululemon.  I had just been promoted to manage the retail marketing program (AKA: co-op marketing funds) for one of the company’s divisions.  Shortly thereafter, the sales rep from one of our third tier key accounts told me how happy he was that I’d been given that promotion.  I responded, “Really?  It feels like all I ever tell you is ‘no… we don’t have the money.’ ”  He replied, “Yes, but I know that you’ve listened and I understand why priorities lie elsewhere.”

Even if people don’t get what they want, they need to know that their concerns have been seriously considered and why a different course of action is being pursued.  Cursory dismissal of what they see as a legitimate issue keeps the question “in play” and often doesn’t allow your employees to move forward.

3.  What happened?  And what did you make it mean?

As a change manager, I ask people this all the time.  What story are you creating around something that occurred that makes it seem more insidious than it actually was?  If we can objectively state the facts around an incident, conversation or observation and separate that from the judgment that often ensues (“he doesn’t respect me…”, “she’s never gave my idea a chance…”, “they are blocking progress intentionally…” or worse), we can reduce tension and help people take things less personally.

When introducing new initiatives and especially new organizational structures to teams, I find this technique extremely beneficial in helping people remain a bit more open to what’s happening or being said.

Granted, this one is a bit esoteric.  It basically says that declarative statements can place limits on ourselves as we face new challenges.  Phrases like “I am open”, “I am a risk taker” and “I am not attached” allow greater possibility and opportunities for exploration than other, narrowing statements like “I am not creative”, “I’m not good enough”, “I am a planner” and “I am an introvert (or any other dimension in the Myers-Briggs model).”

It’s important not to make any of these statements mean anything … good or bad, right or wrong.  Just notice the impact they have on you as you contemplate options that someone is asking you to consider… or as you coach your employees to move toward a recommended course of action.

Change happens and is interpreted within the context of a company’s culture.  And as I often say, language and culture are inextricably intertwined.  (I’ll write more later about my thoughts as a change management consultant in global, multi-cultural, multi-lingual settings.)  In managing communication to impacted employees and coaching executives to support initiatives they’re sponsoring proactively and visibly, choosing words that resonate with a specific audience is crucial.  The exact same words delivered at one company or in one department may have an entirely different impact (good or bad) on a different audience.

Here is a quick overview of what change management is and the benefits it can bring to project delivery and overall business results. 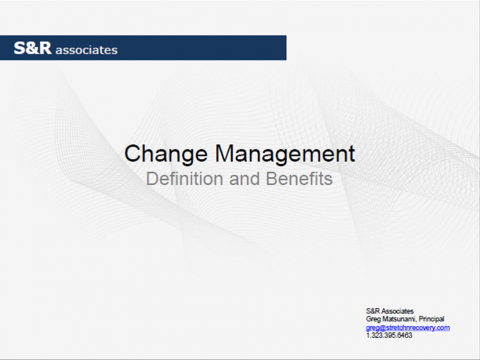 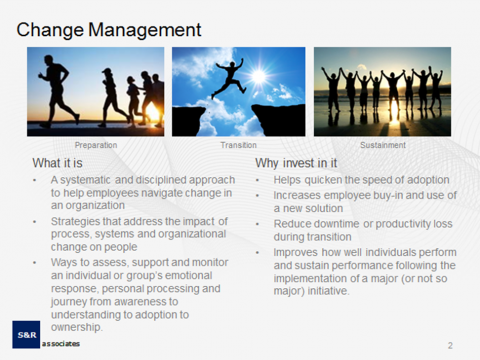